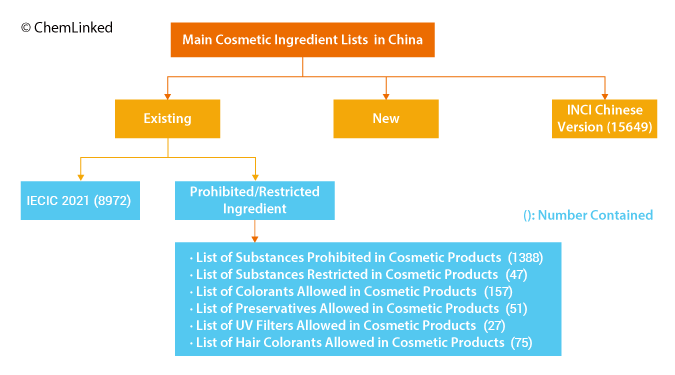 Part I The History of IECIC

According to Chinese cosmetic regulations, new cosmetic ingredients to be used in the products are required to complete pre-market approval, hence cosmetic manufacturers need to judge whether an ingredient is new prior to manufacturing. Before 2003, cosmetic ingredients were regulated based on the Cosmetics Hygienic Standards issued in 1987, which covered the regulated ingredients with prohibited substances, restricted substances, preservatives, UV Filters and colorants. Under this regulation, figuring out the status of an ingredient was difficult until the first publication of Inventory of Existing Cosmetic Ingredients in China (IECIC) on 27 April 2003 by the Ministry of Health (MOH), the competent authority in charge of cosmetics at the time. Cosmetic ingredients listed in IECIC are regarded as existing ingredients and exempted from pre-market approval. 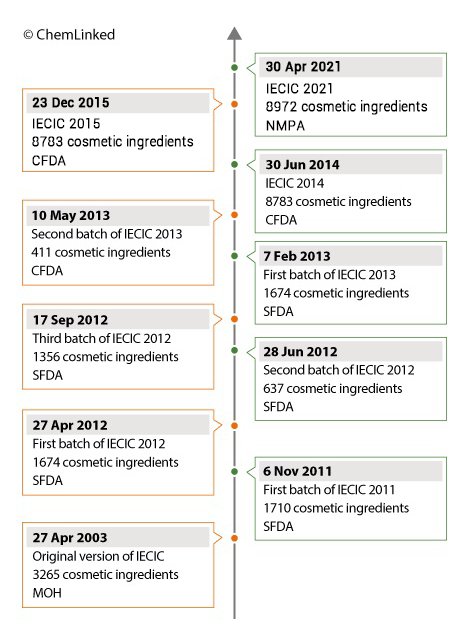 IECIC 2003 covered 3265 cosmetic ingredients that were used in China but was far from a comprehensive reflection of all ingredients used in the market. Besides, this Inventory did not align with international markets. From 1 Sep 2008, China Food and Drug Administration (CFDA) took over the full responsibility of cosmetic supervision from MOH. In order to guarantee safe use of existing ingredients and facilitate the determination and registration of new ingredients, CFDA started to amend IECIC.

On 6 November 2011, CFDA issued the draft of IECIC 2011 for public consultation, which contained the first batch of existing ingredients in the Chinese cosmetic market, 1,710 in total. Compared with IECIC 2003, IECIC 2011 (first batch) only contained about a little more than half of the ingredients.

In 2012, CFDA released three draft batches of IECIC, totaling 3,667 ingredients. It was noted that the new inventory not only listed the Chinese names and the recorded names in International Nomenclature of Cosmetic Ingredients (INCI) of existing cosmetic ingredients, but also specified the limit for ingredients restricted to be used in cosmetics.

In 2013, CFDA finalized two batches of IECIC containing 2,085 substances in total. It was expected the third, which was also the last batch of IECIC 2013 will be published in the near future. However, CFDA chose to abandon the batch-wise release approach.

On 23 December 2015, CFDA released IECIC 2015, which added nine ingredients and deleted nine due to duplication errors. Therefore, the total number of ingredients in IECIC 2015 is the same as the IECIC 2014. The gradual improvement of IECIC has seen the use of cosmetic ingredients standardized, the determination and registration of new ingredients facilitated, and the safety of cosmetic products promoted.

On Jan 1, 2021, China implemented a brand-new cosmetic regulatory framework. To align with the new framework, on April 30, 2021, China National Medical Products Administration (NMPA, formerly CFDA) finalized the Inventory of Existing Cosmetic Ingredients in China 2021 (IECIC 2021), which came into force on May 1, 2021.

With the approval of new cosmetic ingredients, the rapid development of the cosmetic industry, which is aligning itself with the international market and global regulatory standards, in the future, NMPA will dynamically update the IECIC.

2. Highest Historical Use Concentration of Ingredients

IECIC 2021 newly increases the information of cosmetic ingredients' highest historical use concentration, which can be used as recognized evidence in the simplified safety assessment to provide a reference for cosmetic safety assessment.

For ingredients without declaring  the highest historical use concentration in the Inventory, cosmetic registrants and notifiers can provide corresponding materials as evaluation evidence in accordance with the requirements in Technical Guidelines for Cosmetic Safety Assessment, or conduct safety assessment according to risk assessment procedures to ensure the safety of the ingredient.

Cosmetic companies might confuse IECIC with the INCI Chinese Version and falsely regard ingredients in the latter as "used or existing" in China. It is worth clarifying that the INCI Chinese Version is translated to standardize the Chinese translation of INCI name, cosmetic labeling and instructions, which is certainly not a criterion for illustrating the regulatory status of an ingredient. 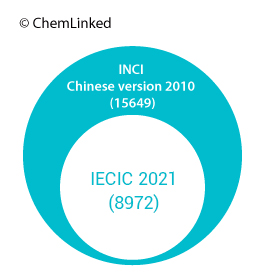 The INCI Chinese Version was first published by MOH in 2007 with 12,072 ingredients, which was translated according to the INCI names included in the International Cosmetic Ingredient Dictionary & Handbook Tenth Edition (2004) (ICI Dictionary) managed by the Personal Care Products Council (PCPC). The List is updated accordingly with the expansion of the ICI Dictionary.

The latest INCI Chinese version containing 15,649 ingredients was translated and released by CFDA in 2010, based on its twelfth Edition (2008). Cosmetic manufacturers are required to label the ingredients using the standard Chinese names if they are covered by the List.

Now the NMPA is revising the 2010 version. It is expected that the new version will be released soon.