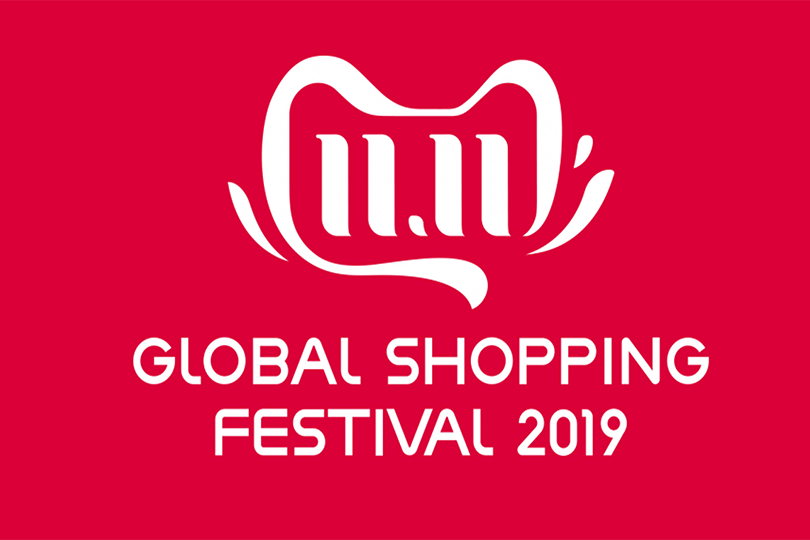 China’s and the world’s largest e-commerce shopping day is just around the corner. Yes, double 11 i.e. November 11th of each year is China’s own version of Black Friday and it is already upon us. Speculation is rampant on whether the 2018 figure of 30 billion dollars of sales in 24 hours can be broken this year but given trends and forecasts, it’s a safe bet to expect this benchmark will be smashed.

This year’s double-11 campaign is already in full swing with pre-sales smashing last year’s figures. In preparation for the big day, ChemLinked has analyzed the core 11-11 strategies of China’s big e-commerce platforms and brands and the tactics they use to drive sales in the run up to and during 11-11.

Tmall recently launched a channel named “Priority Trial”, in which brands can offer mini-size samples with lower prices. The samples will also come with a special coupon usable only on 11-11. 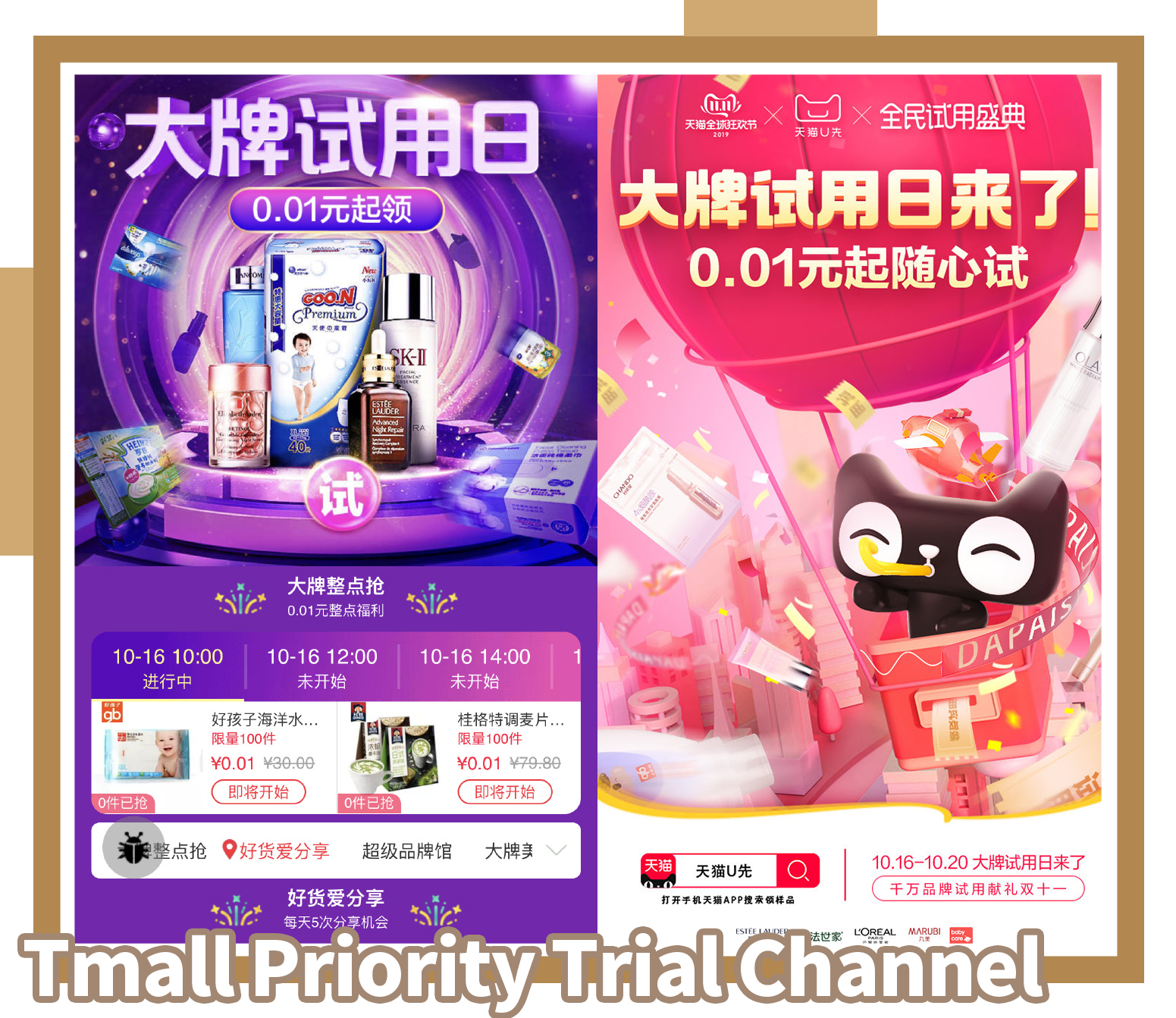 Elizabeth Arden has released sets of its flagship products which include 6 pieces of Advanced Ceramide Capsules Daily Youth Restoring Serum, 6 pieces of Retinol Ceramide Capsules Line Erasing Night Serum, and 6 pieces of Skin Illuminating Brightening Night Capsules With Advanced MI˟ Concentrate. The price of the set is only 40 yuan (slightly less than $6).
To compare the 11-11 special price, ChemLinked referred to the official website of Elizabeth Arden, 20 pieces of products are priced at almost $20, almost triple the price of the double-11 special set. [1] 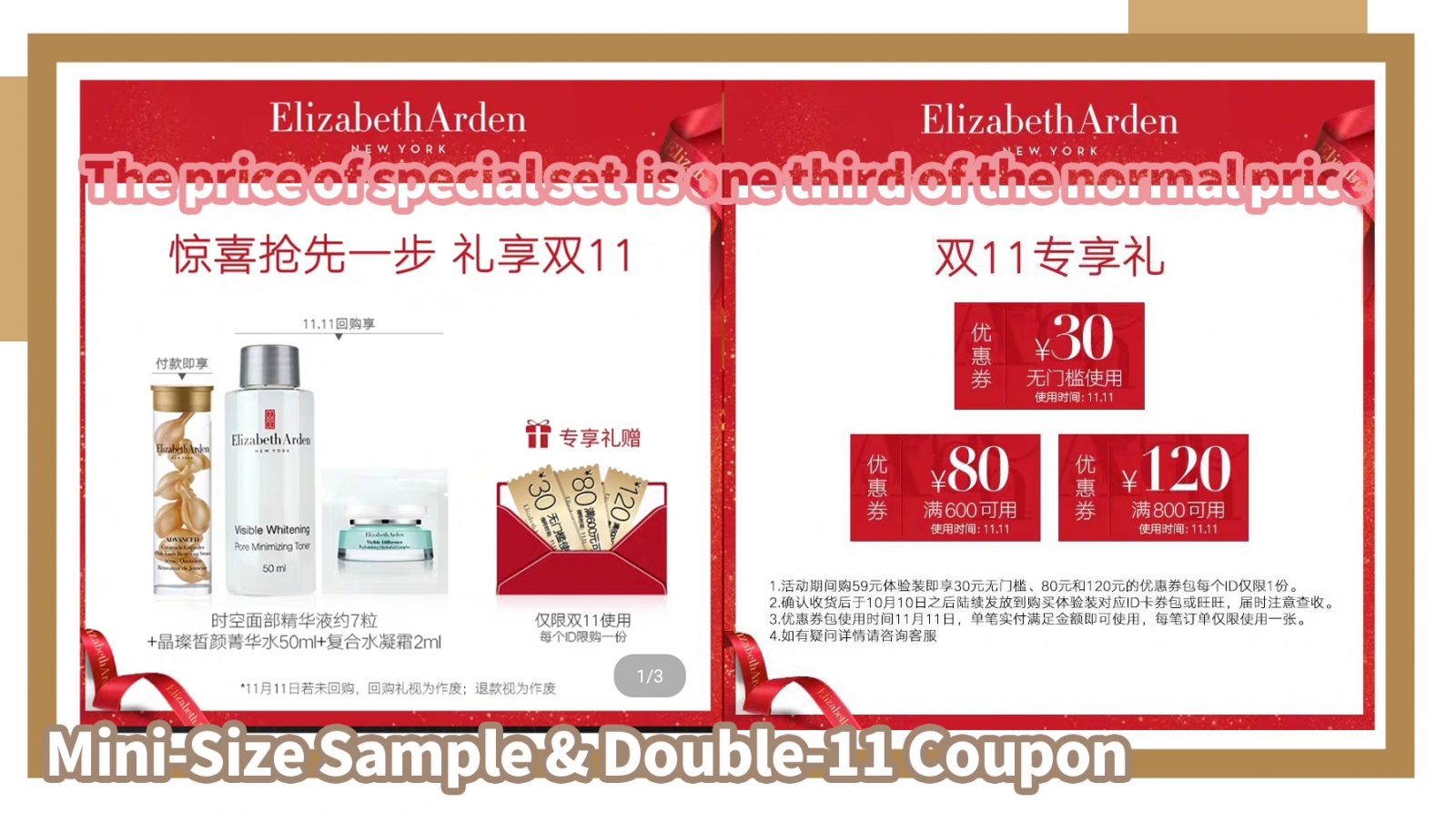 It is worth mentioning that the sales of hair ampoules in 2019 on Tmall increased by 230% from the same period a year earlier. [2] 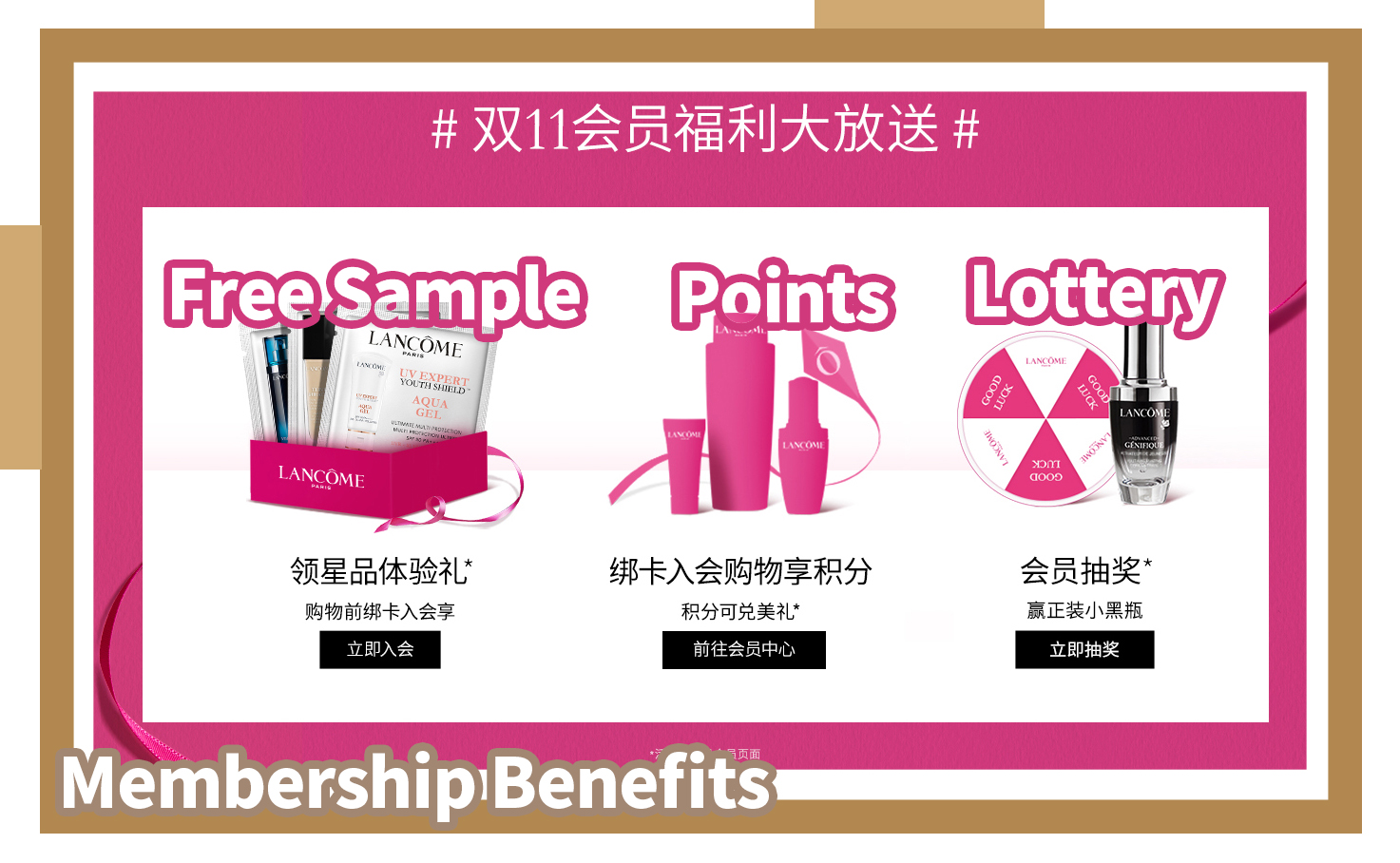 A huge investment in advertising and promotion has made Olay a great success since 2018, especially its pro-x series which is called an “affordable replacement” of SK-II. To attract more potential consumers and encourage them to join the membership scheme, Olay released a mini-size box composed of newly released products including cream, serum, and essence. Moreover, the price depends on whether the customer already had a membership (if not, the price was 81 yuan – 12 dollars). After applying for membership, the price changed to 49.9 yuan($7). 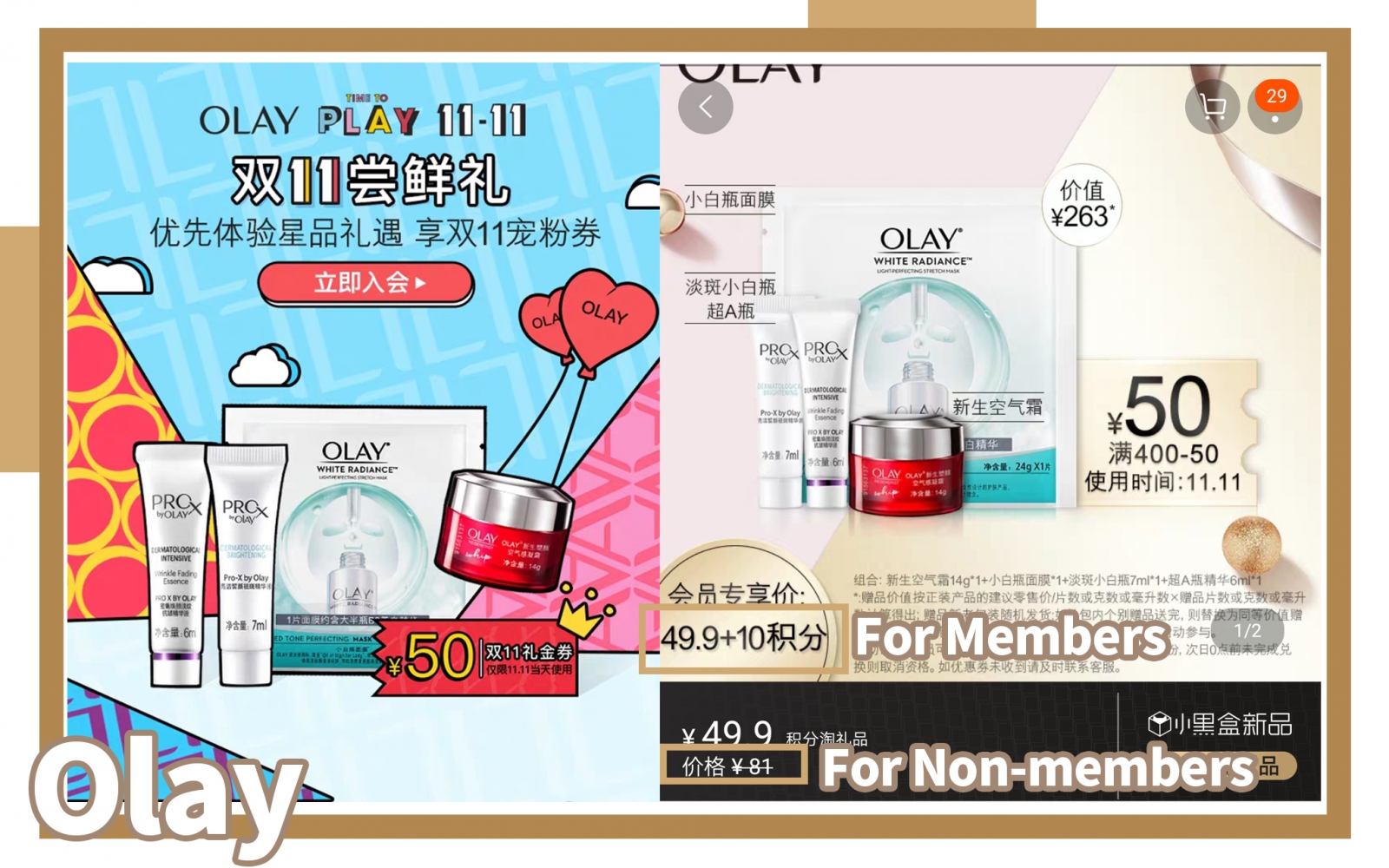 The strategy of Decorté is just the same as Olay. The product is not available for purchase unless the viewer is a member of its Tmall flagship shop.

As early as 2016, Taobao Live introduced live-streaming. This is now a popular channel for both brands and consumers to build up interaction and grow sales. In 2019, Taobao Live underwent a period of major growth, During the double-11 carnival, almost every seller on Taobao will set up more than one live broadcast.

Viya and Austin Li, as Taobao top-flight celebrities, have gained huge traction on Taobao Live. Take the live stream opened on the evening of the 20th of October 2019 as an example during which Viya and Austin Li achieved more than 555 million and 336 million views respectively.
The categories of products shown in the live room were also broad and included snacks, cups, cosmetics, air purifies, and even furniture. One sofa priced at 2000 yuan (equal to around $286) was ordered more than 18,000 times from Austin Li’s live stream.

Before the double-11 festival, more than 20 international luxury brands such as Chanel, Michal Kors opened flagship shops on the Tmall platform. During the last Double-11 Festival 93 luxury brands participated. More than 50% of beauty brands released gift boxes in advance of the Tmall double-11 events. Meanwhile, 215 brands such as Lancôme, SK-II, YSL, Givenchy, and Shiseido customized 241 exclusive products released on Tmall for double-11. [4] 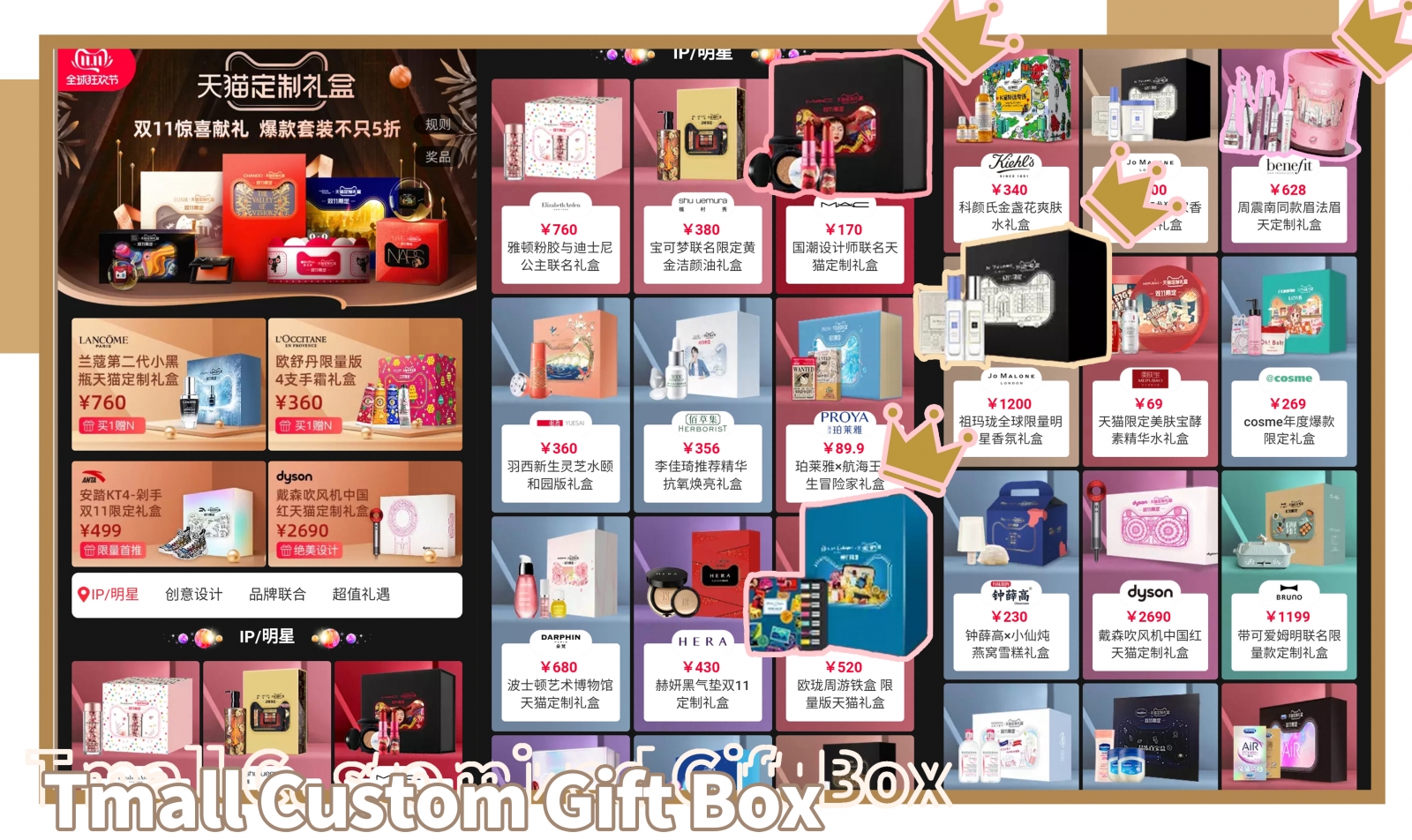 The makeup brand Mac is cooperating with a Chinese designer Angel Chen on a dragon pattern bullet lipstick and cushion foundation. The limited products have been preordered over 125,000 times as of the 28th of October.

Cosmetic brand Benefit is using the face of young idol Vin Zhou, who began as a member of idol band R1SE, to release a series of fan-targeted activities, including customized handbooks and star stickers. 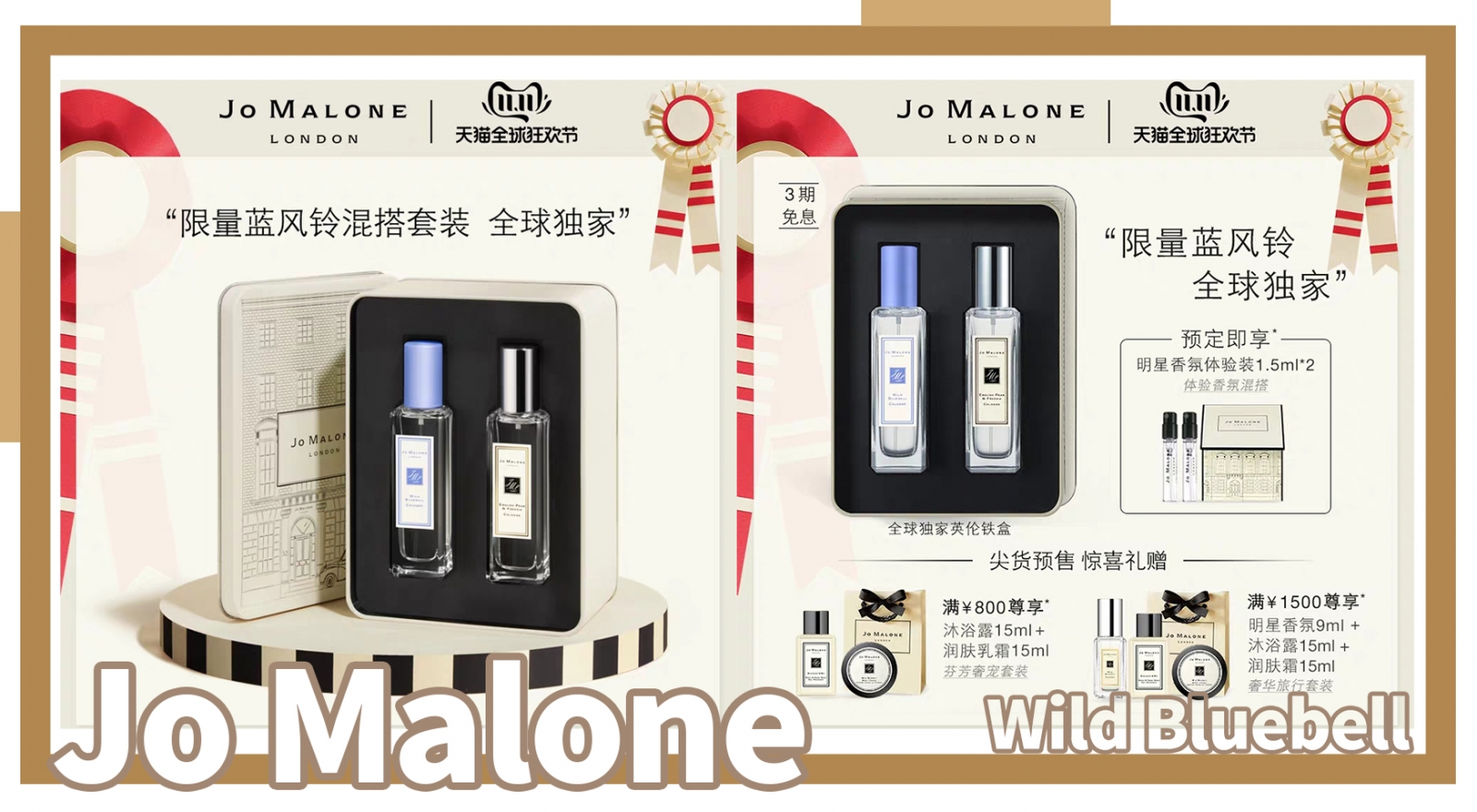 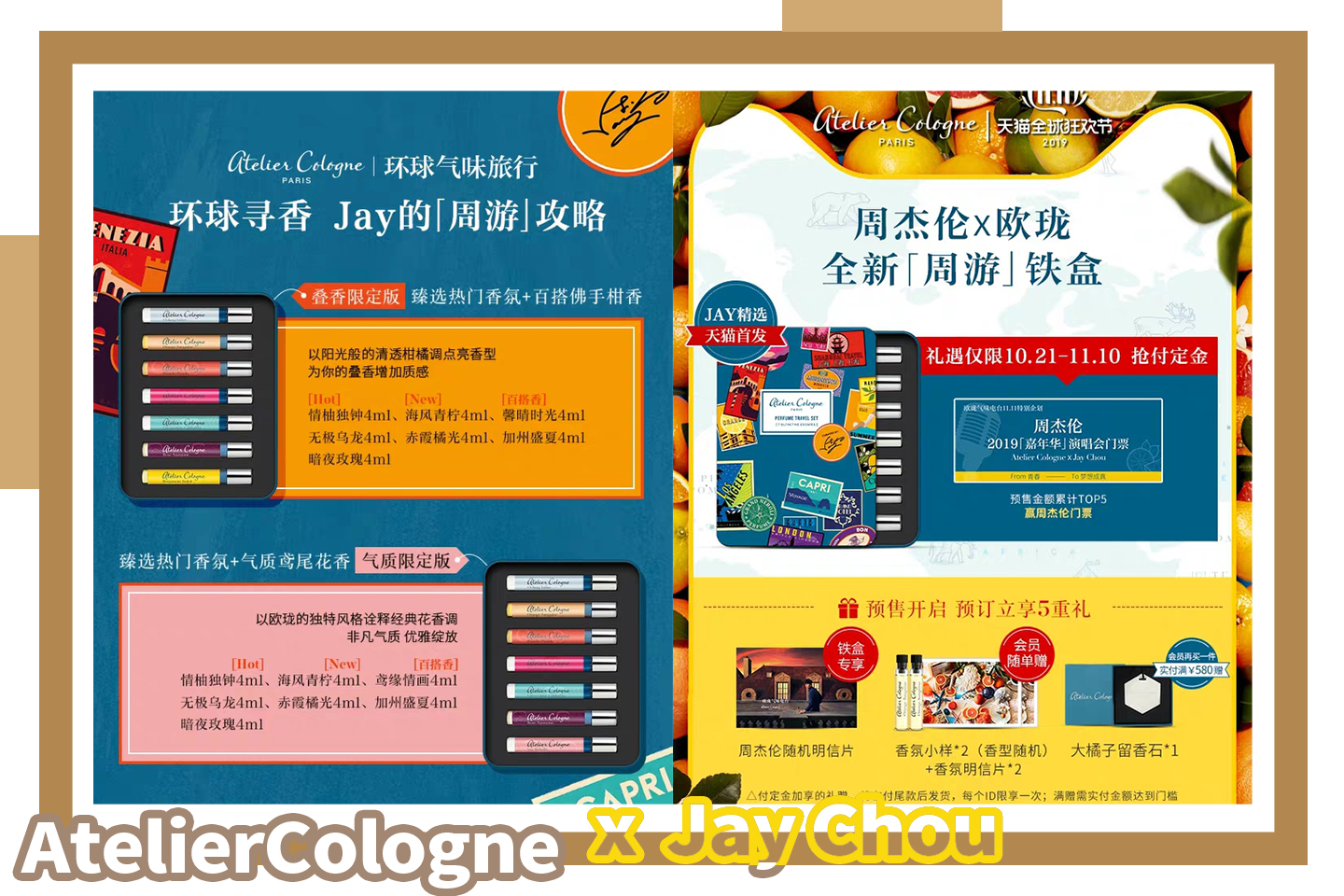 “Buy One Get One Free” Feast 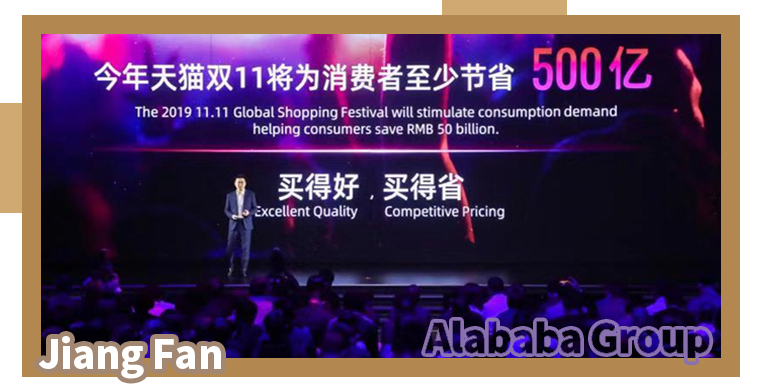 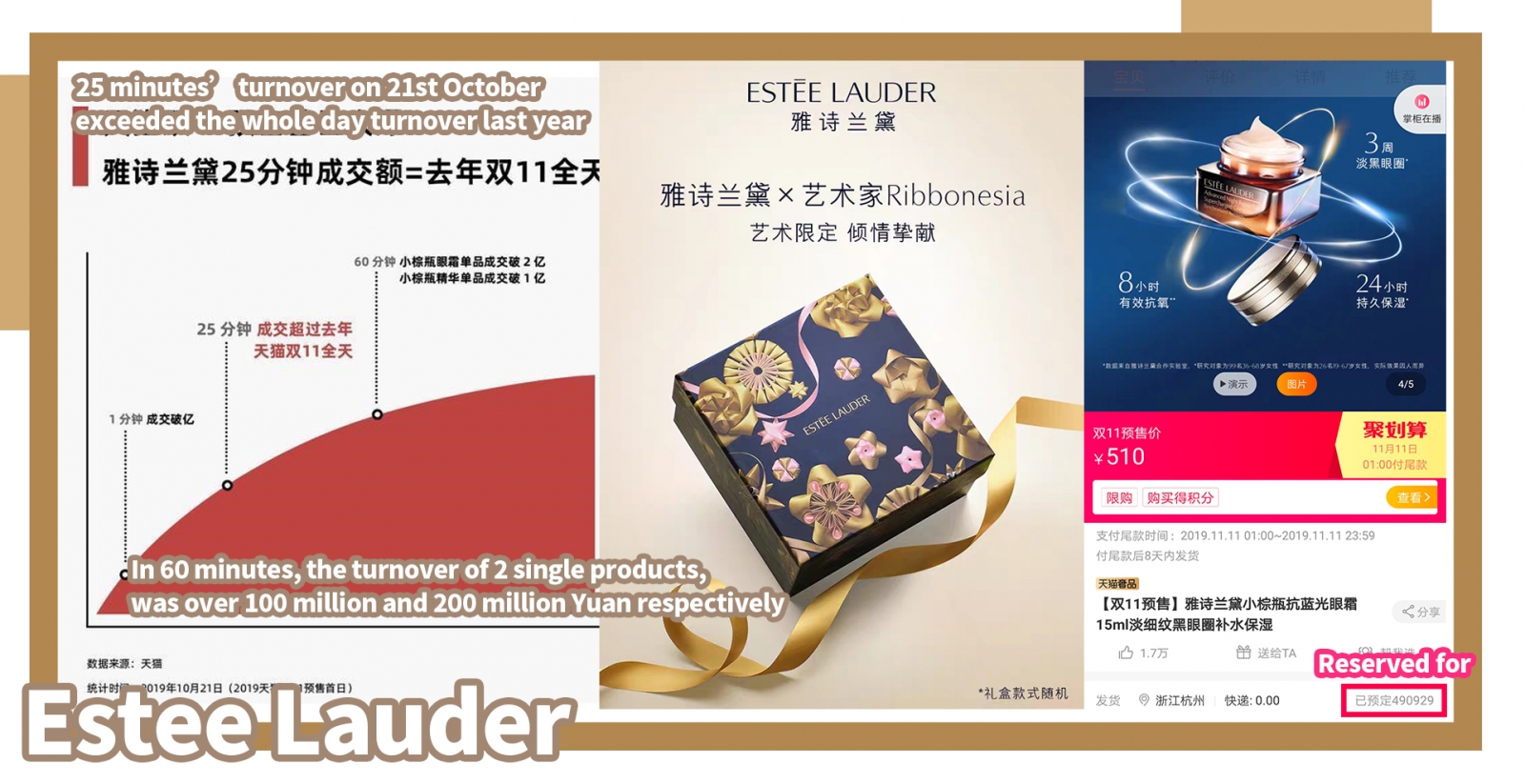 Lancôme is also utilizing the buy one get one free promotion. Lancôme is also using strict schedules and certain promotions are subject to limited availability and only on certain days. Lancôme’s Absolute Revitalizing & Brightening Soft Cream was only available on promotion on October 21st.

Evidence-based efficacy is a major driver of consumer purchasing in China[2]. Harnessing this trend is American skincare brand SkinCeuticals who aims to provide advanced skincare backed by science. SkinCeuticals also offers a “buy one get one free” discount for its Hyaluronic Acid Intensifier. As of the 28th of October, this product has already been reserved more than 70,000 times. 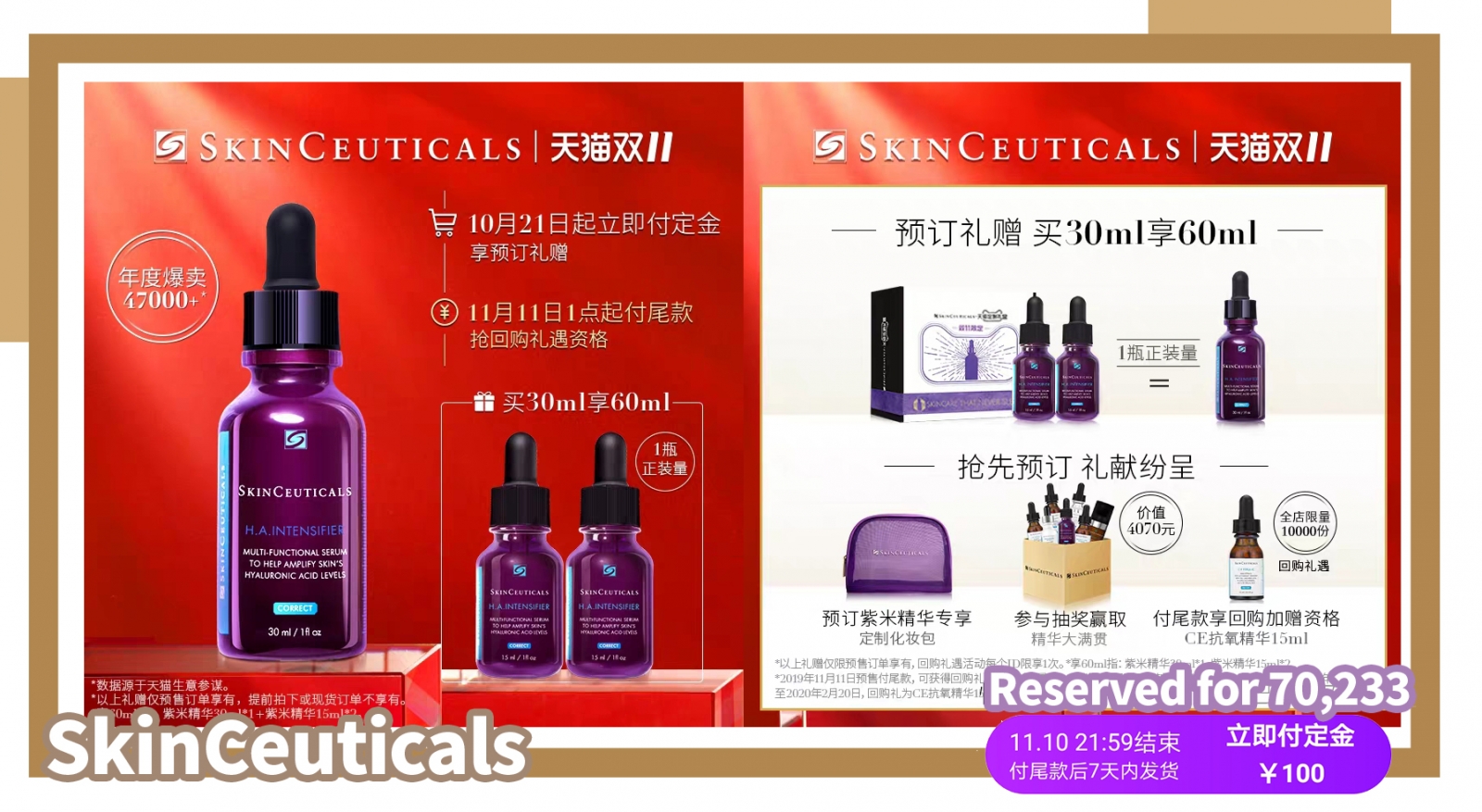