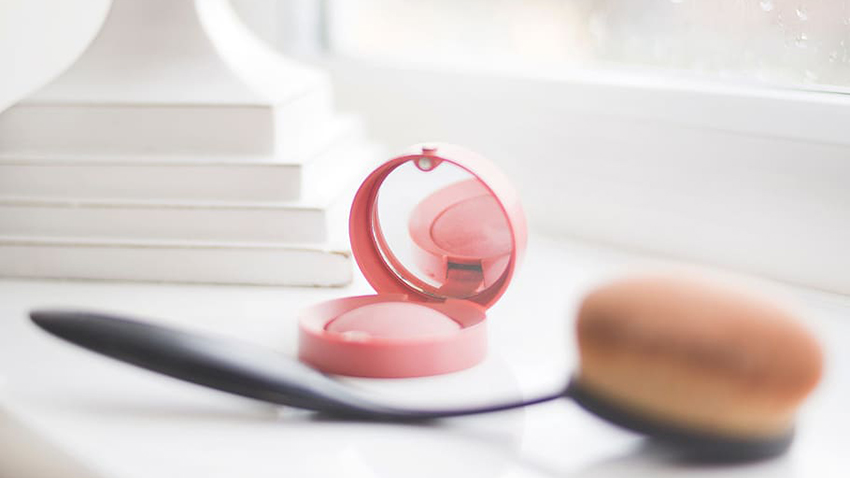 In 2021Q3, the Chinese cosmetic market has been sluggish of late for multiple reasons. However, some brands still showed excellent performance. 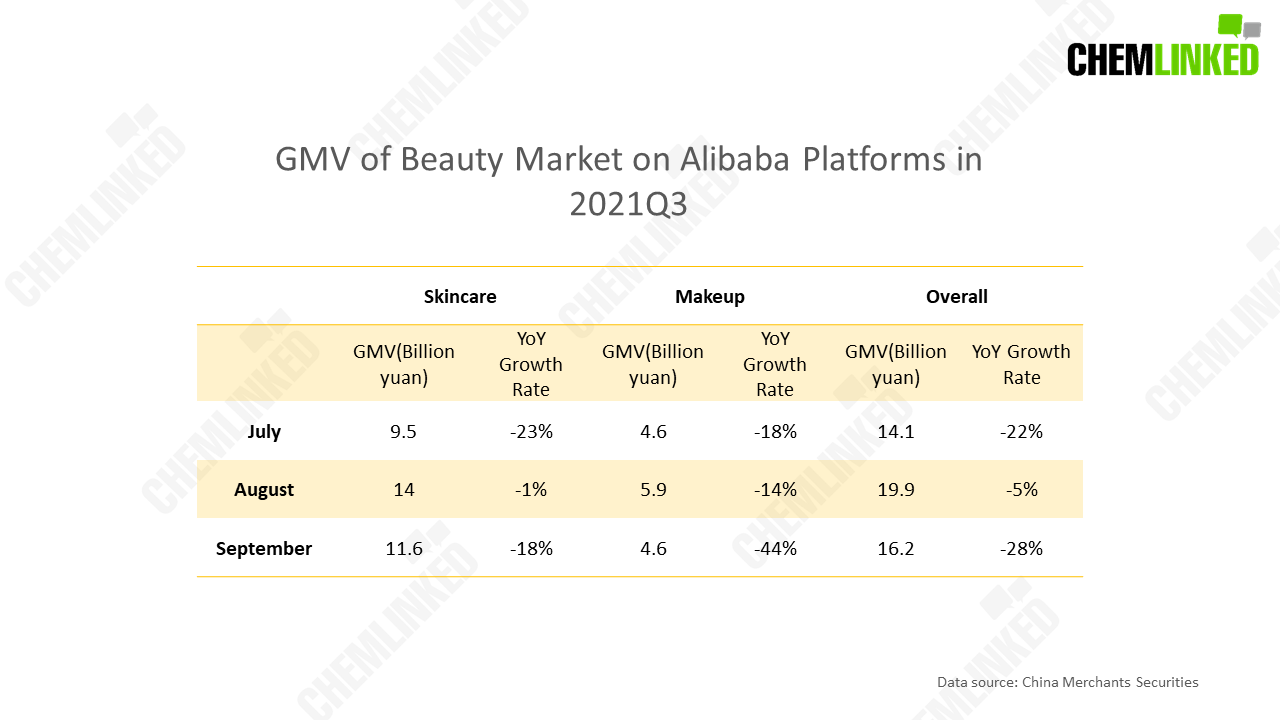 Above data shows that the whole cosmetic market was on a downward trend in Q3.

In July, the GMV of the beauty market on Alibaba platforms was 14.1 billion yuan, a decrease of 22%. This is mainly because many consumers chose to shop in advance at the 618 shopping festival in June. July was an off-season for cosmetic consumers.

The situation was improved in August. The total GMV reached 19.9 billion yuan, decreasing by 5%.

In September, the online sales of the beauty market continued to decline, with color cosmetics falling by 44% Year-on-Year.

The big drop is partly because of the outstanding sales performance this sector achieved last year, which brought a high base effect. Also, the epidemic rebound impacted the sales data, especially the color cosmetics’ sales, due to people tending to reduce their frequency to go out, thus the frequency they do make up decreasing correspondingly.

The awful online data was also corresponding with the sector’s retail sales data. In July, August, and September, the cosmetic retail sales were 23.9 billion yuan, 29.4 billion yuan, and 31.7 billion yuan, with growth rates of 2.8%, 0%, and 3.9%. These data are much lower than those in former months, implying that the whole beauty market slowed down.

Besides, the rise of other e-commerce platforms also affected the cosmetic sales on Alibaba platforms, especially Douyin e-commerce. In August, the GMV of the beauty sector on Douyin E-commerce reached 6.374 billion yuan, the highest among all months. Many brands achieved great results on Douyin: in September 2021the GMV of the domestic skincare brand Proya grew from nearly 27 million yuan in November 2020 to 70 million; international brand Estee Lauder’s GMV reached 138 million. 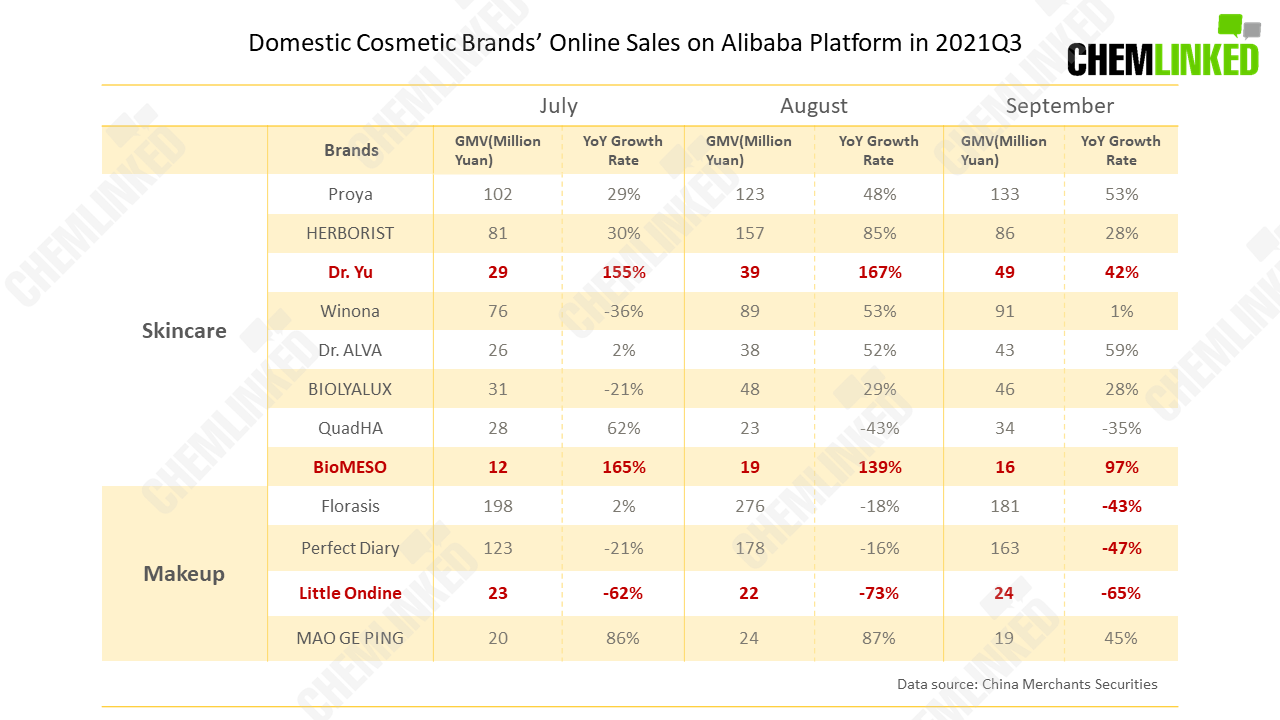 In 2021Q3, among domestic brands, the skincare sector performed better than the makeup sector. Skincare brands such as Proya, Herborist, Dr. Yu, Dr. ALVA, and BioMESO, maintained rapid growth. In contrast, GMV data for color cosmetic brands was not optimistic. Little Ondine’s GMV fell by more than 60% for three consecutive months. Florasis dropped by 18% and 43% year-on-year in August and September. However, Florasis still ranked first for nine consecutive months, followed by Perfect Diary, ranking second despite showing a downward trend. MAO GE PING, a makeup brand founded by a famous makeup artist of the same name, became an exception, with growth rates of 86%, 87%, and 45%, respectively, in the past three months.

Functional skincare brands continued their popularity. DR. Yu’s GMV growth rates even exceeded 100% in July and August. Among BIOLYALUX, QuadHA, and BioMESO, three brands from Bloomage, the hyaluronic acid giant in China, BioMESO was undoubtedly the most impressive one, with almost over 100% growth rates every month. DR. ALVA is a new rising star in the skincare market with a focus on the skin microbiome field. Its sales data in Q3 showed that its advanced technology and skincare concept have been attracting consumers.

Compared with domestic brands, the overall performance of international brands showed relatively growth. Expect Shiseido to witness a severe drop in Q3, other brands such as Lancome, Bobbi Brown, NARS, and Shu Uemura all achieved substantial growth in the third quarter. Among them, the GMV of Lancome in August and September increased by 197% and 370%, reaching 760 million yuan and 762 million yuan respectively, far exceeding other brands; the year-on-year growth rate of Shu Uemura's GMV was also relatively impressive, reaching 162%, 106%, and 40%, respectively.