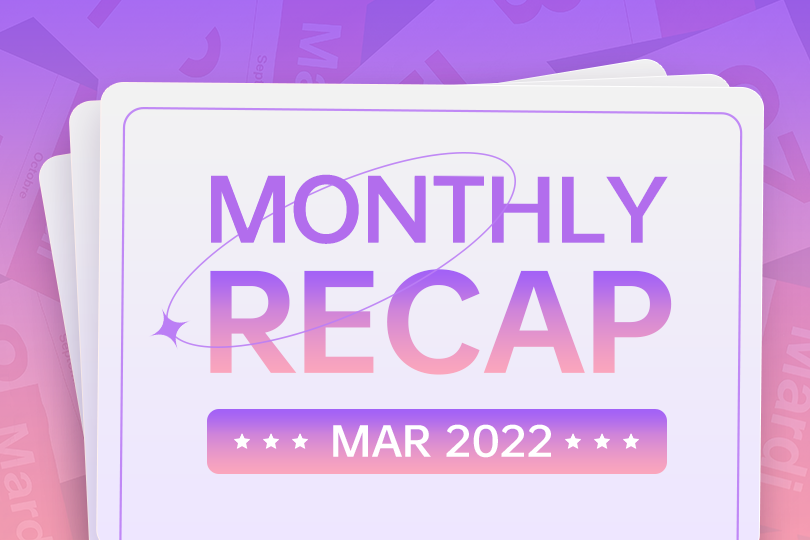 In March 2022, China National Medical Products Administration (NMPA) updated the notification information of one new cosmetic ingredient (NCI). The basic information of the new NCI is as follows:

Children Cosmetics Logo is Not a Product Quality Certification Mark

Labeling "Little Golden Shield" on the cosmetic packaging only indicates that the product belongs to children cosmetics, but does not mean that the product has been approved by the regulatory authorities or certified for quality and safety.

China NIFDC Consults on the Limitation of Benzene in Cosmetics

To strengthen the management of safety risk substances in cosmetics, on March 10, 2022, China National Institutes for Food and Drug Control (NIFDC) released an announcement seeking public comments on the limitation requirements of benzene (CAS No. 71-43-2). According to the risk assessment results, the limit of benzene in cosmetics is proposed to be 2mg/kg.

On November 30, 2021, China NMPA announced that the addition of whitening ingredient SymWhite 377 in general cosmetics is illegal, and shall be investigated and dealt with by the provincial regulatory authorities. On March 14, 2022, Shanghai Songjiang District Administration for Market Regulation issued an administrative penalty decision. A company was fined 30,000 yuan because the claims of “SymWhite 377” and “whitening” appeared in the advertising of the company's general cosmetics. It claimed the efficacy that the product did not have, which constituted the act of publishing false advertising. This is the first public penalty case related to products containing SymWhite 377. The notification of the above products has been cancelled.

China NMPA to Set Up a Cosmetic Technical Specification Committee

On March 15, China NMPA issued a notice to select members of the Cosmetic Technical Specification Committee publicly. In order to implement Cosmetics Supervision and Administration Regulation and further improve the formulation and revision of cosmetic technical specifications, NMPA will establish a Cosmetic Technical Specification Committee, and the selection of the committee members are now open to the public. The selection scope includes cosmetic supervision departments, scientific research institutions, colleges and universities, cosmetic testing institutions, drug testing institutions, toothpaste testing institutions, and hospitals. The target candidates are technical experts who have professional backgrounds in cosmetic science, fine chemicals, analytical chemistry, microbiology, toxicology, medicine, pharmacy, public health, or biotechnology and have worked in the cosmetic or toothpaste industry.

On March 18, China NMPA issued a notice on the disposal for the inspection and testing institutions for cosmetic registration and notification according to their capacity evaluation results. The capacity assessment results and disposal measures are as follows:

The capacity evaluation's unqualified, unsatisfactory or doubtful items are related to "thermotolerant coliforms" and "cadmium." From this evaluation, it can be seen that NMPA is strengthening the supervision for inspection and testing institutions.

On March 22, Yiwu Customs issued an administrative penalty decision. The reason for the penalty was the omission of the CBEC consumption tax. When the company imported cosmetics through CBEC, it declared the gross weight of the product as the first legal quantity to the customs. In this way, the unit price per gram of this cosmetics was lowered below the cosmetic consumption tax threshold, resulting in the omission of consumption tax. The company was fined 800,000 yuan. Customs departments across China are cracking down on the illegal act of evading tax by concealing the name, quantity, and amount of the imported goods.

On March 25, Guangdong MPA issued an administrative penalty decision. The reasons for the penalty were:

The company was fined 40,000 yuan, and the legal person was imposed a 10-year ban on cosmetic production and operation activities. This is the second case of a ban on the legal person to engage in the cosmetic industry after CSAR implementation. 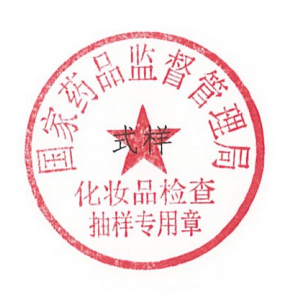 On January 7, 2022, China NMPA issued the finalized Good Manufacturing Practices for Cosmeticsand will implement it on July 1, 2022. Cosmetics registrants, notifiers, and entrusted production enterprises shall organize the cosmetic production in accordance with the Practices. Following that, on March 30, 2022, NMPA released the draft of Inspection Points and Judgment Principles of Cosmetic Good Manufacturing Practices for public consultation. Regulatory authorities across China will use the Points as a basis to determine whether the enterprise complies with GMP. Any suggestions about the Points can be mailed to NMPA (hzpjgc@nmpa.gov.cn) before April 20, 2022.

China NIFDC Consults on Safety and Technical Standards for Cosmetics 2022

On March 31, 2022, China NIFDC released a draft of the Safety and Technical Standard for Cosmetics 2022 (STSC 2022) for public consultation. The consultation will end on April 30, 2022. Stakeholders with any suggestions can fill out the feedback form and send it back by email at hzpbwh@nifdc.org.cn before that.

Compared with the 2015 version, the framework of the 2022 version remains basically unchanged. The draft STSC 2022 revises the content that is not suitable for the current supervision practice, retains the content that still applies, incorporates the previous approved revisions for STSC 2015 (they were issued as notifications), as well as standardizes and improves some terms and expressions.

A Beauty Collection Store was Fined and Confiscated 887,000 Yuan for Operating Cosmetic Samples with Non-compliant Labels

Recently, a well-known beauty collection store was fined and confiscated 887,000 yuan for selling cosmetic samples with non-compliant labels. The labels of these small samples lack the full ingredient list, production batch number, or notification number of imported cosmetics, which violates paragraph 1 of Article 35 of CSAR, “The minimum sales unit of cosmetics shall be labeled, which shall comply with relevant laws, administrative regulations and mandatory national standards, and the content therein shall be authentic, complete and correct.”

The fine is a huge amount in the industry. It can be seen that the cosmetics sample business has aroused the attention of the regulatory authorities, and the supervision for the sample sales will be gradually tightened.

China issued eleven group standards in March. The basic information is as follows:

On March 29, 2022, the Ministry of Environment (MOE) published the notice on submitting the delivery and import records of recycled packages and products. Enterprises whose products and packaging are subject to recycling shall submit the delivery and import records of 2021 via the EPR online system before April 15, 2022. The notice also specifies the key points for the online submission, including the required documents, exceptions, etc.

In March 2022, Japan Pharmaceuticals and Medical Devices Agency (PMDA) announced 143 batches of non-compliant cosmetics were recalled. The recalls were primarily associated with non-compliant labeling, including inconsistent ingredient labels and not labeled in Japanese.

Thailand’s Ministry of Public Health announced revisions to the cosmetic ingredient lists in Cosmetic Act B.E. 2015 on February 28, 2022, which have been effective from March 1, 2022. The key revisions include:

Notably, these revisions further align the Thai regulations with the updated ASEAN Cosmetic Directive adopted by the past ASEAN Cosmetic Committee Meetings.

On March 13, Indonesia Halal Product Guarantee Agency (BPJPH) announced a new halal label logo stipulated in BPJPH Number 40 of 2022 regarding the Determination of Halal Labels. The new halal logo has been applied nationally and must be shown on the product packaging as a sign of product halalness from March 1, 2022. Halal-certificated products in stock manufactured and packaged with the former halal logo before implementing the new logo are allowed to be sold first. After that, they shall immediately adjust the halal label on the products. Halal certification started voluntarily for cosmetic products on October 17, 2021 and will become mandatory since October 17, 2026.

On March 29, Indonesia BPOM released the draft amendments to Technical Requirements for Cosmetics Ingredients for public consultation. The main amendments include:

2) revising the use requirements for other ingredients and natural ingredients;

In November 2021, the EU added 23 CMR substances (substances classified as carcinogenic, mutagenic or toxic for reproduction) to the list of prohibited ingredients in Regulation (EC) No 1223/2009, including the anti-dandruff agent ZPT (CAS No. 13463-41-7). The amendment officially came into force on March 1, 2022. Cosmetics containing ZPT cannot be made available on the European Union market after this date.

After a commenting period of eight weeks, EU Scientific Committee on Consumer Safety (SCCS) released the final opinion on Kojic Acid (CAS No. 501-30-4) on March 17, 2022. According to SCCS, the use of Kojic Acid as a skin lightening agent with a maximum concentration of 0.7% in the final cosmetic product is safe for consumers.

EU SCCS Consults on Opinion as to Triclocarban and Triclosan

With an aim to align with the objectives of the EU's Chemical Strategy for Sustainability, on March 28, 2022, the Commission issued an announcement to seek feedback on the existing cosmetic provisions from all interested parties. The Commission will further improve the rules on cosmetics with reference to the results of this consultation and the previous consultation on the inception impact assessment published in October 2021. The consultation is open until June 20, 2022.

1. All You Need to Know about Cosmetic Laws and Regulations in South Korea

South Korea has the most unique and wholesome cosmetic regulation scheme globally, which guides product safety and encourages product innovation. Fully understanding Korea's cosmetic regulation definitely can help enterprises in developing their products no matter whether you are targeting the Korean market or not. However, the complex regulations and the language barrier stop many overseas companies from learning the compliance requirements of Korea and entering the Korean market. ChemLinked will host webinars on April 21 (English Session) and April 22 (Chinese Session) to give you an overarching understanding of the cosmetic laws and regulations in South Korea, including the product standard, ingredient requirements, and the import procedure, etc. Welcome to register here. 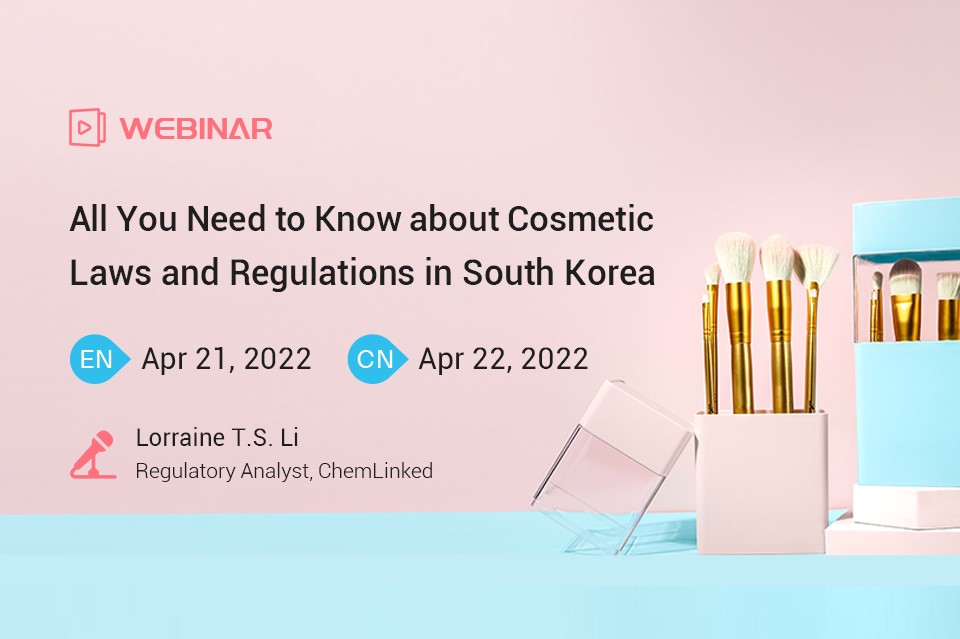 On June 3, 2021, China NMPA issued the finalized Administrative Measures on Cosmetics Labeling, spelling out the requirements for the labeling and prohibited claims of cosmetics (including cosmetics provided to consumers in the form of trial, gift, exchange, etc.) under China's new cosmetic regulations. The Measures will be implemented on May 1, 2022. Compared with the previous labeling regulations, the Measures has stricter requirements in terms of labeling definition, consistency with registration/notification documents, Chinese labels, product naming, guiding words, etc. Labels of many registered/notified cosmetic products need to be redesigned and updated. ChemLinked will host a webinar on April 26 to explain the required contents and noteworthy points in labeling imported cosmetics, analyze common non-compliance causes, and give insightful regulatory compliance recommendations to enterprises. Welcome to register here. 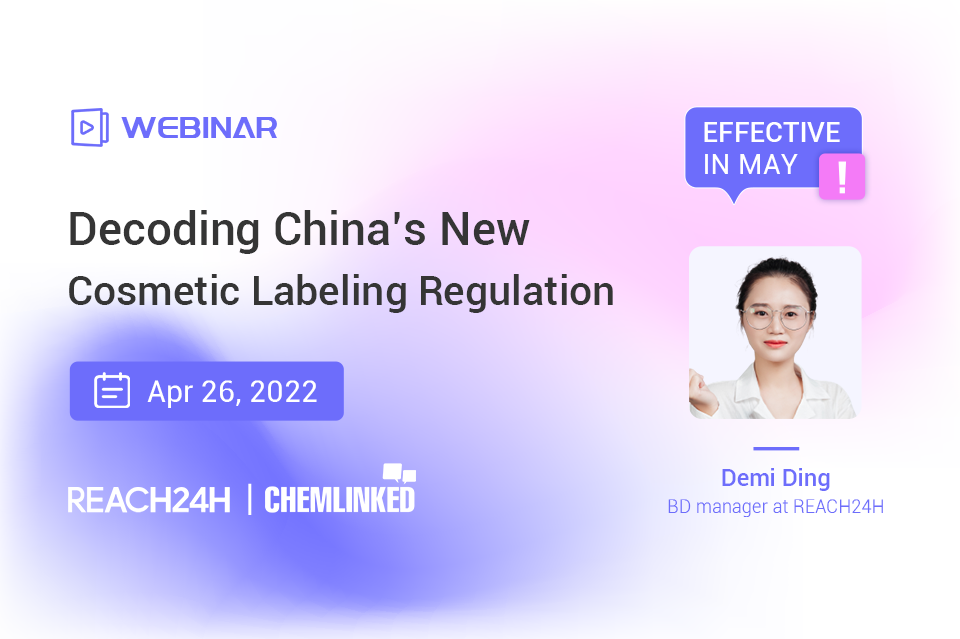