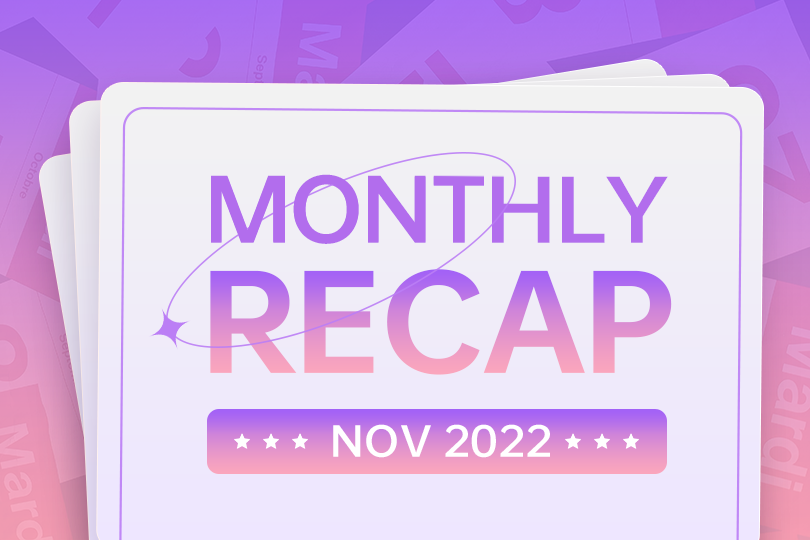 On October 27, 2022, China National Institutes for Food and Drug Control (NIFDC) released an announcement answering a question related to the generation of cosmetic ingredient submission code. It emphasizes that using terms such as "ingredient submission code obtained" to falsely claim that the ingredients have been approved or recognized by regulatory authorities is suspected of false or exaggerated publicity, and will be investigated and punished.

On October 28, 2022, the Department of General Operation of China General Administration of Customs (GACC) released an announcement to further clarify the requirements for exporting cosmetics containing Triethanolamine (TEA) to China. In accordance with the announcement, if TEA is added as a pH adjuster in cosmetics, and the product's testing report shows that TEA monomers are not detected, the enterprise is not required to provide the Import License for Dual-use Items and Technologies.

On November 2, 2022, Beijing Municipal Medical Products Administration (MPA) released the draft of Guidelines for Investigation and Punishment for Minor Illegal Act in Cosmetic Operation Supervision in Beijing (Trial) (the draft Guidelines) for public consultation. Applicable to small-sized enterprises, the draft Guidelines specifies eight types of minor illegal acts, and corresponding conditions for them to be exempted from punishment. The specified illegal acts of cosmetic operator include:

On November 10, NMPA issued an announcement deciding to carry out a one-year pilot project of cosmetic personalized service in Beijing, Shanghai, Zhejiang, Shandong and Guangdong. The pilot project aims to explore feasible models and effective regulatory measures for cosmetics personalized services, and to form replicable experiences and practices. NMPA will evaluate the effect, and determine whether to extend the pilot time, expand the pilot scope, and increase the variety of pilot products.

On November 24, 2022, the State Council issued an official reply which approved the establishment of 33 new cross-border e-commerce (CBEC) comprehensive pilot zones. The provincial governments are responsible for rolling out the detailed plans. This is the 7th expansion since the establishment of the first pilot zone in Hangzhou in 2015. With this expansion, there will be a total of 165 CBEC comprehensive pilot zones in China.

On November 24, 2022, GACC updated the list of rejected food and cosmetics in October. Five batches of cosmetics respectively imported from Japan, Germany and France failed customs inspection. The reasons for rejection were inconsistency between products and certificates, and lack of required qualified documentation.

On November 25, 2022, China National Center for ADR Monitoring commenced a public consultation on the draft of Guidelines for Cosmetic Registrants and Notifiers to Collect and Report Cosmetic Adverse Reaction (Trial). All concerned stakeholders can submit comments to lilan@cdr-adr.org.cn before December 9, 2022.

To standardize the collection and reporting of cosmetic adverse reaction, the draft sets detailed requirements for registrants and notifiers in each link of the monitoring, including information collection, recording, verification, submission, analysis, etc. In addition, the draft proposes that the person in charge of quality and safety shall assist the legal representative or the main responsible person in performing the management duties of cosmetic adverse reaction monitoring.

In this April, multiple provincial and municipal MPAs issued notices to extend the deadline for notifiers to submit the annual report to June 30, 2022. As this deadline has expired, in November, provincial MPAs of Jiangsu, Sichuan, Shandong, Liaoning, Fujian and Heilongjiang, as well as Municipal MPA of Chongqing announced to cancel the notification of general cosmetics lacking the required annual report. These cosmetics shall not be sold or imported from the date of cancellation.

In November, China issued nine cosmetics-related standards. The basic information is as follows:

PMDA: 62 Batches of Cosmetics and Quasi-drugs Recalled in November

In November 2022, Japan Pharmaceuticals and Medical Devices Agency (PMDA) announced that 62 batches of non-compliant cosmetics and quasi-drugs were recalled. The recalls were primarily related to labeling, including sale name, trademark, etc. In addition, 21 batches of cosmetics were rejected for using the ingredient that cannot be used in cosmetics applied to mucosa.

South Korea to Issue the Guideline on Reporting Functional Cosmetic

On November 21, 2022，Korean Cosmetic Association (KCA) unveiled a notice to solicit public opinion on the new Guideline on Submission of Reporting Functional Cosmetic. The Guideline drafts the report submission procedures and the instructions for filling in the report for different situations.

The Regulations, an example of CGMP standard, FAQs, and application method are included in the appendix of the Guideline.

Thailand Revises the List of Permitted Sunscreens Used in Cosmetics

On November 25, 2022, Australia AICIS adopted and implemented the Industrial Chemicals (General) Amendment (Introductions of 10 kg or Less) Rules 2022, following the public consultation on the proposed changes for introductions of 10 kg or less in October 2022. To help stakeholders ensure their compliance, the authority also updated the corresponding guide for the categorization of chemical introduction (importation and manufacture).

EU SCCS Finalizes the Scientific Advice on Triclocarban and Triclosan

On November 4, 2002, EU SCCS released the final scientific advice on Triclocarban and Triclosan in cosmetics. Compared to the preliminary version released in this March, the final advice further clarifies the applicable consumers in different use conditions of these two ingredients, as well as additional concerns regarding their use in cosmetics.

On November 11, 2022, EU released the Commission Regulation (EU) 2022/2195, introducing new amendments to the use requirements for cosmetic ingredients in Regulation (EC) No 1223/2009 (Cosmetics Regulation). All amendments aim at the lists of restricted ingredients and permitted UV filters, including:

On November 17, 2022, EU notified WTO of a draft Commission Regulation which proposed to newly include 30 more CMR substances (those classified as carcinogenic, mutagenic or toxic for reproduction) into the prohibited ingredients list in Cosmetics Regulation. The draft is currently open for comments until January 16, 2023, and will officially take effect from December 1, 2023.

US Proposes to Increase the Fees for Color Additive Certification Services

On October 29, 2022, Canada published the Canada Gazette, Part II, Volume 156, Number 44, including a Notice of Intent on the Labeling of Toxic Substances in Products. According to the notice of intent, Canada plans to require certain products (including cosmetics) to be labelled with the information on substances listed in the List of Toxic Substances (Schedule 1) of the Canadian Environmental Protection Act (CEPA). Stakeholders can mail any suggestions to Substances@ec.gc.ca before Jan. 12, 2023.

On November 18, 2022, Health Canada released a notice concerning the review of the Cosmetic Ingredient Hotlist, considering to make several amendments to the Hotlist. Companies are welcome to contact Health Canada (cosmetics@hc-sc.gc.ca) to provide safety information or other considerations about the proposed ingredients, which may further inform Health Canada's decisions.

On November 26, 2022, Canada published the Canada Gazette, Part I, Volume 156, Number 48, including a Notice of Intent to Amend the Domestic Substances List Under Subsection 87(3) of CEPA. According to the notice of intent, Canada plans to amend the manufacture and import requirements of cosmetics containing glycine, N,N-bis(carboxymethyl)-, trisodium salt (CAS No. 5064-31-3). An article will be published later explaining the main amendments.

1. Overview of Cosmetic Labeling and Claims Regulations in the EU, UK, US and Canada

Just as attractive labeling is one of the product's most important features when it comes to sales, so is correct labeling essential for the compliance of the cosmetic product with the cosmetics regulations around the world.

ChemLinked invited Mr Tadej and Ms Tjaša from CE.way to interpret the labeling regulations in the EU, UK, US and Canada, which must be followed if enterprises want to sell cosmetic products in these four regions. Welcome to register here. 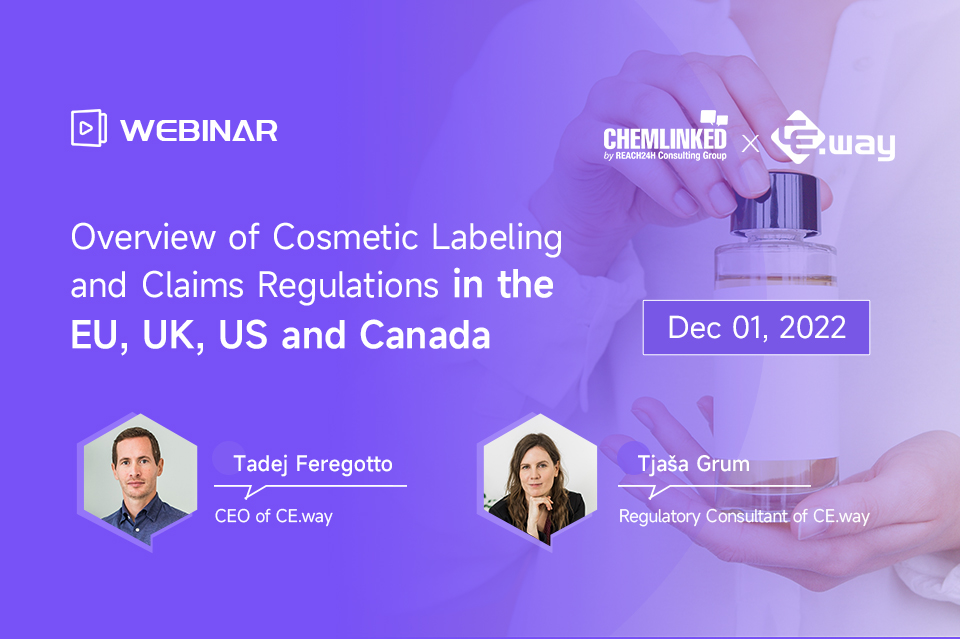 2. Practical Experience of Customs Clearance for Food and Cosmetic Products to China

China is at the forefront of the world's food and cosmetics imports. However, products are subject to stringent supervision in China and must undergo a series of inspections for customs clearance.

ChemLinked will host a webinar on December 7 to introduce the regulatory requirements of food and cosmetic products, as well as customs clearance, including the steps, commonplace mistakes and tips to mitigate the potential risks. 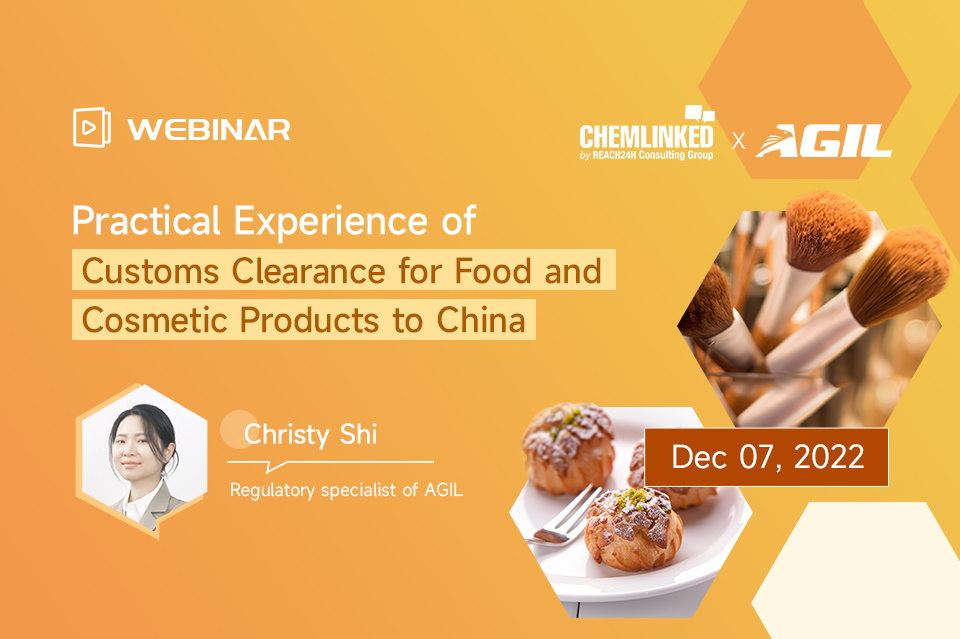 China's brand-new regulatory system has similarities and differences with the EU's. For European companies or companies already marketing cosmetics in Europe, what differences should be considered before placing cosmetics on the Chinese market? 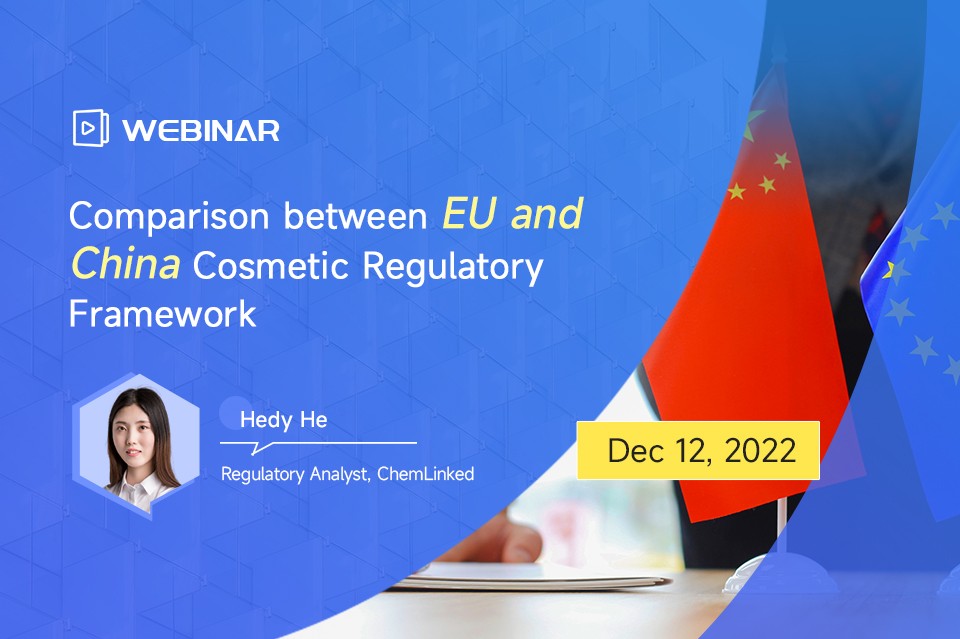 With the increasing global concerns over climate, environment, and energy issues, cosmetic sustainability has gained significant momentum throughout the world recently, leading to a boosting market volume. In response to the emerging and promising market, global governments have successively introduced regulations for cosmetic sustainability, such as microbeads ban, eco-label, packaging recycling, etc.

ChemLinked invited experts from the Independent Beauty Association (IBA), Cosmed and REACH24H Korea to expound the latest regulatory requirements of sustainable cosmetics in the world's important beauty markets, as well as the sustainability-related practices and initiatives of some beauty giants, so as to provide references and suggestions for enterprises to enter the race. 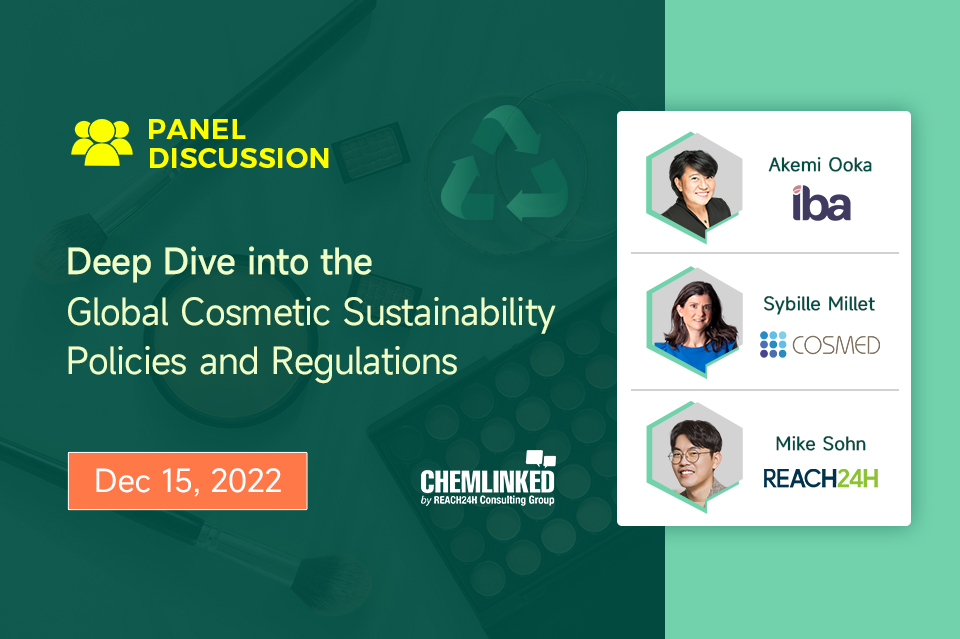 5. Overview and Comparison of EU and US Cosmetic Regulations

When it comes to cosmetic product regulation, EU and the United States of America have very different standards. Yet, these two markets are very attractive and represent nearly 50% of the value of the global cosmetics industry.

To help companies interested in going to Europe or looking to expand to the US understand EU and US cosmetic regulatory framework, ChemLinked has teamed up with EcoMundo to host a webinar on December 19. The experts from EcoMundo will describe the regulations in place in these two different regulatory areas and will identify the similarities and differences between the two. They will also provide precious information and tips to help companies reach regulatory compliance in the targeted destinations. 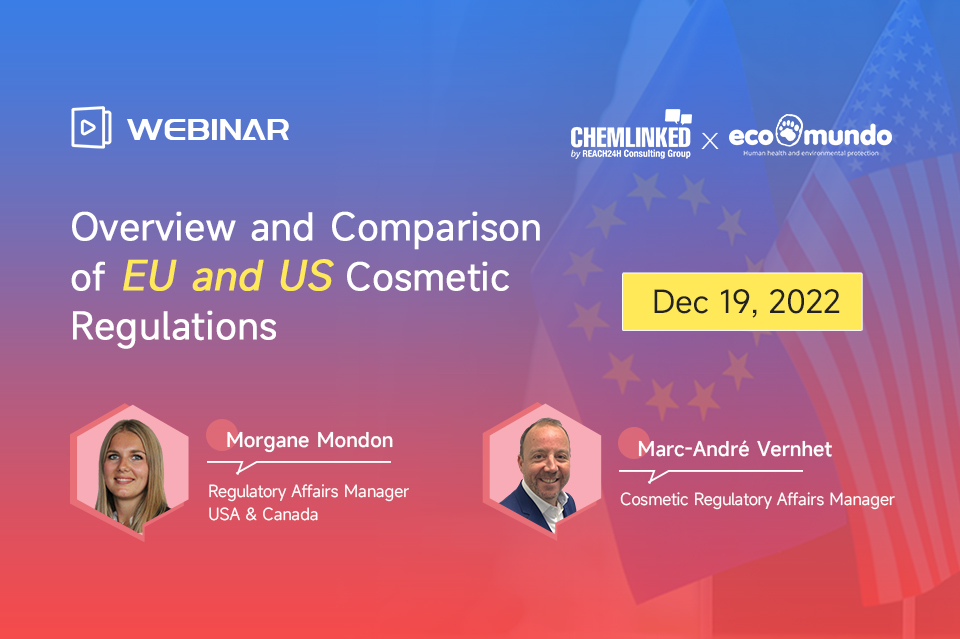